Towards the end of January 2019 this lady medium began to sit with developmental intent within the Lodge environment.  Generally she sits either alone with myself or with one other witness present.
Note: A detailed record of her initial sittings can be found below this post.

Currently, at the opening of each seance the medium is seated comfortably within an open corner cabinet in clear lighting conditions.  During the séance her state of consciousness becomes altered, but she generally retains some awareness of her surroundings.
We have a focussed red light and a soft pink lamp and use either or both of these...making lighting adjustments according to the forms of phenomena that are becoming demonstrated.
Currently all witnessed phenomena appears to be 'delicate' in that, although consistently demonstrated with stability, the visual presentations are very fine...often as if seen through a layer of iridescent chiffon. These presentations are too fine as yet to be captured by a camera.

The following pictures, found on the internet, offer very approximate examples of the types of things currently being seen by two witnessing sitters simultaneously. 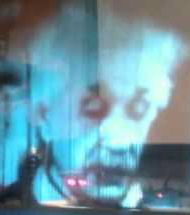 Imagine, if you can, the medium seated within an armchair, with this form of facial appearance seen in front of, and obscuring, her own face.  The presentation isn't always of a face...last night the two witnesses present saw an owl or eagle-like shape.  The presentations appear holographic, and are seen in many colours.  Sometimes the demonstrations take on a smokey appearance...best likened to a very fine silky gauze seen as an overlay to the mediums head and upper torso.  The photograph below is a fair likeness.

During most seances the phenomena-enabling spirit team also demonstrates spiritual control of the mediums hands.  The appearance and movement of the hands varies...often with movement being extremely rapid.  The palms may grow to appear as male, or the fingers may become extended in length beyond the norm...and sometimes the appearance is of many hands.
Strands of energy can be seen linking the hands as they pull apart from each other.  Sometimes a ball of energy becomes formed between, or cupped within, the hands.
Often small lines/dashes of light appear spasmodically within the energetic strands.
Last night as two witnesses were watching each saw a small 'particulated animated wiggle' of light within the familiar misty energy strands.  This photo of lightening offers some likeness...but in fact what was seen last night appeared animated in an independent sense and appeared 'unusually different'...totally unlike lightening in fact.  Phenomena such as this is intriguingly fascinating!!!

At the end of May we unsuccessfully attempted to capture the visual phenomena using a video camera set up within dim red lighting conditions.  As development progressses further attempts will be made periodically.

Please note that I founded the Lodge with a scientific frame of mind and the seances here are held for learning purposes.
Chris Di Nucci

What is this about?

In the summer of 2018 a new sitter came along to the Lodge circle. As two regular sitters knew her already this eased her inclusion.

Her attendance and reliability became proven over time, as did her stability of mind and focus of interest. She therefore became a valuable supporting sitter within many of the séances held.

Late in January 2019, as she had previously spoken to me of wanting to sit for development, I decided to offer her an opportunity to do so.